Take me out for a spin in the tank please.

It is very unlikely that you’ll ever hear the sentence said to you as it has probably never occurred to you to replace the family car with a tank. Before you do dismiss it though it might not be such a bad idea after all. I’m not talking about a great big Russian thing or a massive American Bradley mainly because you wouldn’t be allowed to own one, at least not one with a working gun and weapons, and also the cost would be prohibitive.  You’re much better off looking at owning something a bit smaller but roomier like the British armies FV432. The nearest you’ll get to a test drive is if you go on Tank Driving Days such as the ones from Armourgeddon Tank Driving . Here you’ll get to drive an FV432 around a prepared track to test it and your skills. As they were designed to be multi-purpose carrying up to seven troops and even as mobile field hospitals you can quite happily get the family in the back with room to spare. 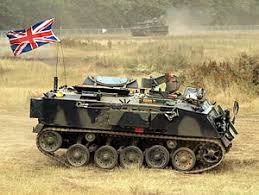 The great thing about the FV432 is that because there never was a massive conflict with the Russians, thank goodness, there are still a lot of them about as they were made from the nineteen sixties to the late nineteen eighties. They were built to last and you can pick them up quite cheaply from army surplus. To be clear the guns will not be on them and the smoke and grenade launchers will be decommissioned. They can go for about three grand and that’s a lot cheaper than a people carrier.  Now I would imagine that the next question you have is if you do buy one can you actually drive it on UK roads. The answer to this is yes but you will need to have an H licence and your normal one only goes up to DE if you look on the back. That might be a little bit of an outlay but at least you’ll also be able to drive a truck after it. Just imagine it, you cruising down the M5 on the way to Devon and there is the usual blockage around Taunton you can just pull the left lever back and the right lever forward and go over the hills. I mean, there maybe some frustration form the local farmers that you’ve done that and the Police might have a say to as you smash into the car park and Taunton Deane services for a quick pit stop.

One last thing, they do about 4 miles to the gallon so maybe some long trips might be out of the question.