The racing Tyre and its changing nature.

There are some tracks that are very hard wearing on a Formula one tyre. The changing of the tyre itself during the race via pit stops is essential to the victory the care of the tyre by the drivers is also vitally important. The drivers most know when to the push the tyre to maximise speed and grip of the track before the types start to degrade. This wear can be seen clearly on a tyre as the lamination begins. When this happens the performance of the car decreases dramatically. There is a very good chance that the car will spin off causing more damage resulting in the end of the driver’s race.  One of the most intense tracks on tyres is the Yas Marina in Abu Dhabi and you can see up close the action as the Abu Dhabi F1 Paddock Club can afford you a ring side seat to this the last race of the season venue. A visit to edgeglobalevents.com/f1-paddock-club/f1-paddock-club-abu-dhabi will give you a very good idea as to what you can look forward to.

Tyres for a Formula one race car are only meant to last for one race. This is very different to that of a regular car tyre that is designed to last for months and even years with careful maintenance and controlled driving technique. To begin with three tyre manufacturers fought for supremacy with all the teams choosing one of them. From the nineteen fifties when Formula one started under the properly organised banner of FISA and throughout the nine sixties this was Goodyear, Firestone and Dunlop. By the end of the sixties Dunlop had become the dominate provider due to its development of a synthetic rubber tyre and an increased tyre width giving it much greater grip and manoeuvrability. There was a rush to try and develop better tyres with an emphasis on speed so Firestone brought out the slick tyre. By the nineteen eighties it was Dunlop and Goodyear that dominated the scene as they produced a much thinner tyre to accommodate the turbo engines that been developed that were powering an incredibly high-powered car. The slick tyre is perfect in the dry weather but as soon as the rain come down it is time to change to the wet tyres. Regulations in late years, for safety, insisted that there were at least 3 to 4 grooves were introduced and this tied in with the coming of Bridgestone who for a time competed with Goodyear for supremacy with teams choosing a manufacturer and certain tracks favouring a different tyre maker. 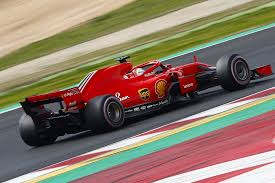 In the modern era the slick tyres have returned, and the producer Pirelli are the sole provider as per contract. This has not always been a harmonious relationship though between driver, teams and producer.